Often, you have a blank background image in an eLearning course as the basis for a scenario or story. This background image doesn’t create a very realistic scene; it feels like a ghost town. This tutorial shows you how to make the background scene more realistic by using a common technique from architecture visualization called “entourage.”

Click to [dlink galleries=477,457]download the source files[/dlink] for this tutorial. You’ll get the PowerPoint files and character images. 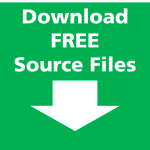 What is up e-learning people! This is Bryan Jones from eLearningArt and today I’m going to show you how to add people to a background to make it more realistic.

So let’s go ahead and get started!

Now I am building this in PowerPoint and I’ll go ahead and give you the source files where you have both the PowerPoint file as well as the character images so that you can build this yourself and follow along.

You can really do this in any program. You can do it in Captivate or Storyline but here I am showing you how to do it in PowerPoint.

So if you just click on the link either on the screen or in the show notes, there will be a link to where you can get those source files. And if you think that’s awesome that I am sharing the source files with you, I would love for you to take one second here and like the video. That would mean a lot to me.

So now let’s go ahead and get started. Let’s start with this blank background and I always like to operate with the selection visibility pane open that kind of shows you your slide, the different layers, and objects that are on that slide. So with this blank slide I’m going to go ahead and insert some images.

Now when you are choosing the images to insert… actually in architecture they call this whole process entourage where you are making the scene more realistic by adding people and other lifelike objects into it.

So you will see here… let me just insert all these people. And I’m just going to go ahead and scale them down a little bit. What you’re going to be looking for is people in motion or doing something that might be realistic in a scene in the background that might be going on, in this example, in the office.

So what you are going to have to deal with here is kind of like these two people could be walking and talking. And I think what you don’t want to do is overdo it. But let’s go ahead and put these people in the background.

And so I’m going to want to shrink this character here and maybe get her walking in the back. She looks too big.

And you know I am looking at the cubes here and saying okay, she should be roughly as tall as the cube… maybe a little bit shorter than that so we will put her there. The same thing this guy is going to be next to her in the background. Let’s shrink him. Like he’s talking to her and she looks like she’s floating back there. We will go ahead and fix that in a second.

I will make him a little bit shorter. There and there. Okay that looks okay.

And then this character, Omet, I am going to have him kind of standing off to the side. And it’s okay to go ahead and run them off of the screen when you actually go into the final view and you publish it. That will get cut off and cropped there.

Now Ben here, I’m going to have him like he’s working in this cubicle over here. And what we are going to want to do again, I can run them off the screen and that’s okay but what I want to do here is crop. You will see the outline of the cube there. Let’s go ahead and crop Ben. And it’s nice and easy with a vertical line if we can just take it right to there… Yeah, that looks pretty good and maybe I’ll control arrow to nudge it into the right position. That looks pretty good to me.

And now let’s grab Jessica. Now Jessica I’m going to have her coming out of one of the cubes. So I actually want her walking out so let’s go ahead and flip her horizontal. And it’s going to be the same thing. She is a little too tall there but we have her vertical line that we are going to want to crop her against so let’s go ahead and crop. Try her there. Boom! Shrink her down a little bit. Now maybe she is coming out right there like that and Omet is there, okay.

So actually that looks pretty good. I’m going to make Omet a little bit bigger so he is in the foreground. And then you know what I might do is layer the characters having a conversation in front. So if we didn’t have that it would be fine right but if you wanted to add some realism to it you would have these people doing stuff in the background there.

Now there is some other techniques I will show you in a future video where we can still have these people in the background and then create contrasts either by making them black-and-white or blurring it a little bit and having the characters really pop and I will show you that in a future lesson.

So I also have some bonus files for you. You can click on the link here at the left of the screen. Or again, I will put it in the show notes as well. And I have a few other videos that I think would be useful for you after watching this one so you know, if you have some more time go ahead and click on any of those links and view those videos and I hope you found that useful. Again, follow along with the source files and play around with it. Entourage is kind of a cool thing.

Anyways I hope you found that useful. Enjoy those free files and until next time have a great day. Thanks!