eLearning Voice Over and Narration

You work hard to create great-looking eLearning programs, so you want the voice of your program to sound great, too.

The problem is, there are a lot of decisions around the purchase of voice over. Where do you start, and how do you decide? Honestly, it can feel just plain difficult. Here, we want to give you a quickie way to get a ballpark estimate on the cost of voice over and explain some of the fees and things you’ll see when you decide to hire a voice over service or talent.

How do I calculate the length of my script, in minutes?

One of the first things you need  to understand is how the word count of the voiced part of your program’s script translates into voice over minutes. Luckily, some simple math does the trick:

Many voice over services and individual talents set prices based on that very number so it’s a good starting point for figuring out costs.

Tip: Note that your full eLearning script may be quite a lot longer, word-count wise, if you look at its total word count. Instead, isolate only the spoken parts of the script and determine the word count for that.

If you do some research across a range of voice over providers, you’ll likely see rates ranging from $4 per finished minute to $55 per finished minute. At the low end, you’re talking about talent hired on services like Fiverr and Upwork, where you may (or may not) get a great result. At the high end, you’ll find the super-talented, velvet-voiced pros who will likely deliver exactly what you expect, but at a price, of course!

With all that in mind, plug your VO word count into the calculator and choose a rate level, and voila, you have a voice over estimate!

And here are some other VO details you should know about:

Note the term “per finished minute” (often abbreviated “pfm”) because you’ll start seeing it everywhere. It refers to voice over that has been cleaned up in an audio program after it’s initially recorded. This is a good thing, because you probably do not have time or interest in doing post-production audio engineering. If you do want to clean up the files yourself, there may be a reduced rate for purchasing raw, unedited audio files.

It’s important to know that the per finished minute rate is often just the starting point for determining the total cost of the voice over. There may be some additional stipulations and fees, too, so look out for and/or ask about the following before engaging someone for pay:

Tip: If you’re looking at a provider on the lower end of the price spectrum, confirm exactly what you’ll be receiving before jumping for joy that you’ve found an affordable option! You may find that their files entail significant work on your part before you can add them to your program. Maybe that’s OK, but you don’t want to be surprised when it happens. That’s never a good feeling.

The key takeaway: Hiring voice over talent for your program requires an understanding of the costs and fees involved. With our calculator, you can start with a ballpark estimate to determine if professional VO is feasible. Then, if you go to the next step of engaging a talent — whether individually or through a service — make sure to understand the full slate of rates and fees so you’ll get what you want at the price you have in mind.

Next, let’s take a look at some voice over options …

Most third-party platforms (Voices.com, Fiverr, Upwork, etc.) allow voice over artists to post demo reels of their work. You can listen to these at no charge and find voices that match the course you’re creating. For example, one person might be great as a narrator, but another might be better as a voice actor. Narrators do a great job reading scripts. Voice actors add theatrics and accents to convey emotion or sound like characters. It’s important to know what you need, and look for that.

For example, the woman I used in the example below, hired through Upwork, has examples just for eLearning. That helped my decision. 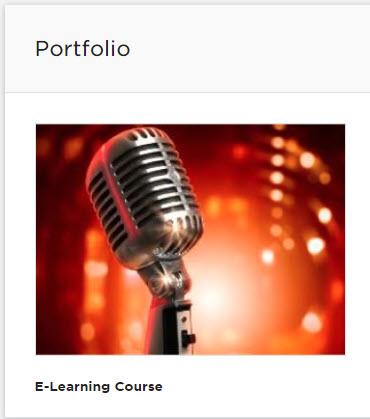 A lot of talent will also link out to example reels on YouTube. If they’re a professional voice over talent, they’ll have lots of examples, guaranteed!

You can also check out the examples below to hear voice over in action in a real eLearning project.

If you’re interested in seeing and hearing the difference between amateur and profession voice over, Text-to-Speech (TTS), and a purely visual example, check out this mock up that I did showing all four of these in the same 1-minute eLearning scenario. I think it’s nice to start with most professional to least, in my opinion, so here goes:

Professional: This example uses two professional voice actors I found on Upwork. They’re actually a couple in real life, recording side-by-side, real-time. You can hear the difference in quality.

Amateur: My wife and I recorded this example in our home office, with a non-professional headset. It took a couple of takes, but we recorded it all the way through, with no editing.

No audio, speech bubbles only: In this example, we used speech bubbles for all text. You’ll see we still had some cinematic sequencing with characters, but no audio was used. Here’s a screenshot of that (no audio). 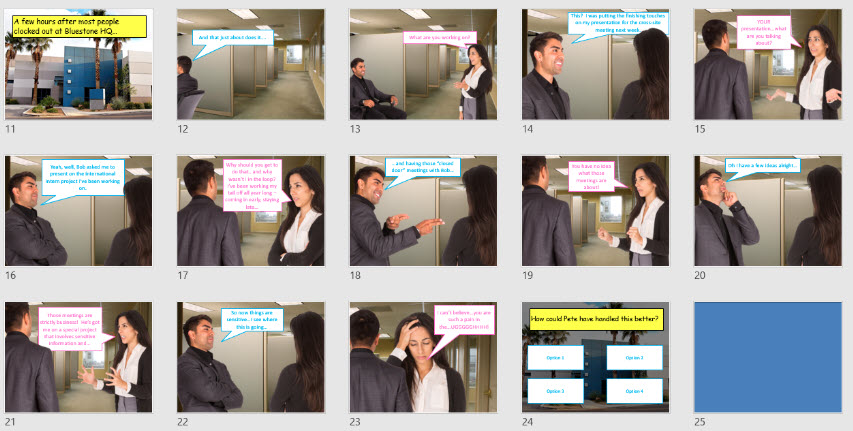 Text-to-Speech (TTS): This script was recorded in Amazon Polly. It’s a pretty robotic sounding, but I think this option will get better over the coming years.

When writing a script for a human VO, it’s important that you get things right, because it costs to have things rerecorded. For example, a comma in the wrong place or a acronym that should be sounded out phonetically instead of read as separate letters may come back different than you expect.

When I send over a voice over script, I like to do the following:

Here’s an example of the script I used for the voice over in the examples provided above: 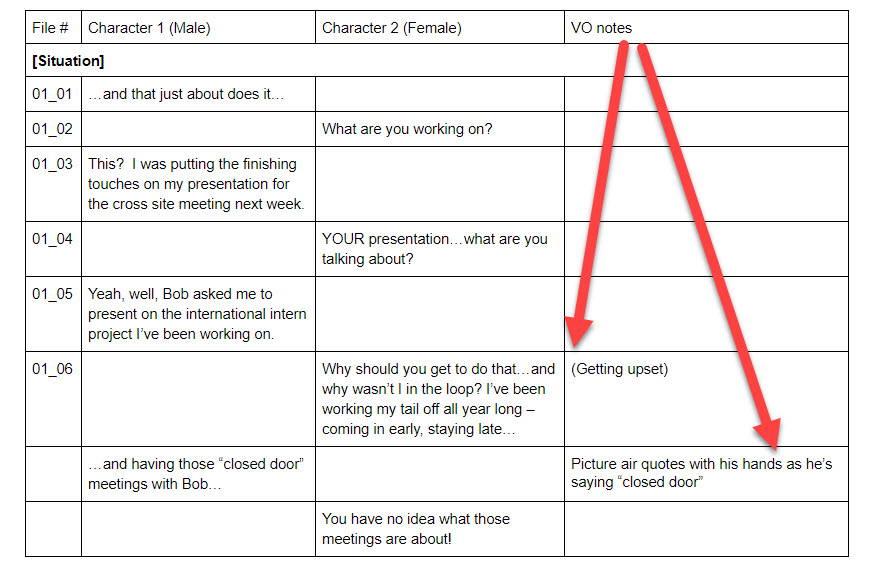 The process of finding a voice over that all of your stakeholders will agree on can be a deep, dark, rabbit hole. That’s why we recommend finding several male and female artists and adding these to a roster. Present just a subset of options (maybe 2-3 male and 2-3 female voices), and present only these to stakeholders. Sending them lots of examples will only lead to difficulty finding consensus.

At elearningArt, we do a lot of scenario-based eLearning development, so we try to have a handful of voices that match up with specific demographics of our characters. That can be important when your program shows people on-screen; it’s best when the visuals and the voices are good match.

There are two main types of narration for eLearning: narration and voice acting. When you’re new to finding voice over talent, it’s easy to assume that any narrator can do both. In fact, as we noted above, they are different skills.

Of course, some VO talent will have both skills. But don’t expect a good narrator to be able to do dramatic acting in your scenario, and a great voice actor may not have the smooth and steady voice you’d like for narration.

In our experience, it’s important to be clear on what your project requires, and then make your voice selection based on examples for that specific skill.

How to Record Your Own Voice Over for an eLearning Course

If you’ve developed eLearning that’ has required voice over work, you’ve probably either recorded voice over yourself, or pinned down a colleague to get them to so some recording for you. While you think you may be saving time and money, there are a lot of pitfalls that can consume both of these resources. Details of successful self-recorded voice over are beyond the scope of this article, but here are some tips and resources we recommend: