I recently had the opportunity to interview the great Jane Bozarth, eLearning author and speaker on such topics as building more engaging training and using social as a learning tool.

[highlight]For the next few days, I’m doing a giveaway of 5 copies of her book, Show Your Work. This book is beautiful, with lots of pictures and examples. But, more importantly, it will change how you approach eLearning design.[/highlight]

You can also read more about it here on Amazon, where it has a perfect 5 star rating!

Now, let’s get into the interview.

How are people getting eLearning design wrong?

We are still battling this idea that if it’s flashy and everything is zinging and binging, that it’s a “good” course. Cammy Bean refers it to it as “Clicky-Clicky Bling-Bling.”

There’s too much flash without enough attention to what we’re doing with our content, without coming up with a good treatment for the content.

I think all of us have been confronted with trying to design something involving content that’s just dreadfully dry or technical or heavy. But defaulting to just making things distracting and pretty is doing a disservice to our learners. It’s our job to figure out how to make it interesting or engaging or meaningful.

So how do you make a course engaging and meaningful?

Go online and find examples. If you’re confronted with a topic like sexual harassment or fire extinguisher safety, Google that and see what’s out there. You’ll probably find 1,000 examples and three of them will be great. Look and see what those three designers did with that content that made it better. Somebody found an unusual approach or interesting take on something. It can be done. Get inspired by good examples.

How do you see the role of the Learning & Development (L&D) professional changing?

What’s started to change is the learner. Learners have figured out that if they need to patch their drywall or run a spreadsheet, they don’t need a course for that. They know how to get to YouTube. They know how to find other tutorials. They are happy participating in user forums.

The training industry needs to go where people are going. What are they choosing for themselves? How can we participate in that and start delivering what they want?

It would be hard for us in 2015 to find any adult who is online who hasn’t learned something from YouTube. Five years ago when I asked the same question, I’d get ten hands up in a room. And now when I ask it it’s everybody. They’ve figured it out.

What single thing can L&D professionals do today to have the most impact on performance?

Listen. I think we’re not very good at listening. We’re very good at telling and creating content and pushing that out. And we’re great. I am not criticizing that at all. But I think that we don’t pay attention to what people really want and need from us.

We spend way too much time talking to people who call themselves stakeholders who actually don’t know what the workplace performance is. I think we have all felt that disconnect between training we were sent to and the reality of our work. There’s this gulf.

Why do social learning campaigns fail?

I see a lot of L&D people wanting to do something in the way of “social” but they still want to have these conversations that they lead and facilitate and guide, and they aren’t really paying much attention to what the learners want to talk about. And the problem with that is that then it doesn’t work and the training department says, “Well, we tried a discussion forum and nobody participated.” Or, “We tried a Facebook group and nobody would say anything.” Well, it’s because we’re not talking about what they want to talk about and responding to their problems.

Another thing that gets people in trouble is they want these enterprise wide solutions and it’s always a nightmare. So doing something with one class, with one group of employees and start building up support.

What’s your advice for an L&D professional looking to create a Personal Learning Network?

I would look around your physical world at anyone worth talking to and also start looking online for where conversations are happening that interest you. I found a lot of mine on Twitter. I initially found a lot of them in #learnchat. And I ended up becoming one of the moderators for that. You will find on LinkedIn there’s eight million groups and you might care about three of them. So you have to do a lot of surfing around to start seeing what appeals to you.

But I would say that some people still aren’t getting the idea of giving back. To “get” from a PLN you need to “give.” I’ve heard people frustrated saying “I asked Twitter a question and nobody answered me.” I look at their account and they’re following 8 people and have never participated in anything. Why would anybody answer you? They don’t even know you’re there.

Why is “Showing Your Work” so important?

I think we’re great at talking about WHAT WE DO. We can do activity reports and status updates and quick roundtables at the meetings. I think we’re not as good at showing HOW WE GET THINGS DONE. And that can be a different thing.

We’ve all felt the pain of having someone leave and before they left we thought they had documented everything they did, and in fact they probably did, but when someone else tries to do the task, they don’t know HOW to do it. We have all these databases of documentation and reports, but we’re not capturing tacit knowledge.

I think showing your work can eliminate some of these problems.

How do you Show your Work?

One of the projects I’ve done that’s had the most response in the post four years was create a Pinterest board. We were having a whole bunch of new hires and a lot of new people were coming here for orientation. I made a Pinterest board: “Here’s the map to our place. Here’s the building. Here’s where you need to park. When you go through the door, here’s a picture of Vanessa. She’ll greet you and give you a parking pass. This is the waiting area. These are our classrooms.”

I have had more people respond to that than anything I’ve done in a long, long time. Like, “oh, oh, I get it. Oh we can do that for site visits.” “Oh, I have a campus. We can do that with our campus tours.” I could have done that on a lot of other tools, but I put it on Pinterest and made it public, and the worst that happened is a bunch of other people can use it too.

What do you see as the role of the traditional authoring tool?

I don’t mean to sound like I see a future with no courses. I see a lot of people still using PowerPoint, which is the basis of a lot of the authoring tools. I see a very heavy use of Articulate Storyline. Every time we have these conversations there’s this huge cry that the world is ending.  There will always have some place for traditional authoring tools, but we have just got to stop thinking the answer to everything is to develop a course and load it in the LMS and everybody’s got to complete it.

I think that we are getting the idea of more interactivity, of more engaging real stuff, not just making it spin and zoom and move. And I think the authoring tools that have made that easier have certainly helped people understand that learners need to actually get their hands on the content in some way.

As far as authoring tools, I think one that’s taking some of the advice above of listening and helping people “show their work” is Articulate. One of the best things they’re doing is these weekly challenges. David Anderson throws out a challenge like, “Give me an interactive slider.” And a bunch of people work on that that week and send it to him and then we can all see each other’s work on that and how people are approaching the same task. I’ve gotten a lot of light bulbs over my head from looking at that stuff. But that’s an example of listening to your community and not just dictating, “Here’s our tool. Buy it! Buy it! Buy it! Buy it!” They’re really good with that. They’ve done a wonderful job at creating a community where people feel like they can go in and get the help they need and great real answers and see great examples.

PowerPoint. Love it or hate it?

In PowerPoint you can actually build nice little branching scenarios and reveals. You can make choices. You can do interactivity. There’s a lot of stuff that I think people just don’t take the time to learn.

If there are two things you should learn about PowerPoint it’s:

2: hyperlinking because that’s not something people get. Once you get past “it needs to be slide one, slide two, slide three,” and learn how to move around it’s very, very freeing.

One of my favorite PowerPoint examples is Kevin Thorn’s award winning Articulate course. When people see his course and learn that it’s all done is PowerPoint, they’re amazed. He sent me the schematic for that which he did in the flowchart layout. And it’s mindboggling to see the structure he built. But, as Julie Dirksen says, “it’s not complicated, it’s just hard.”

Want a free copy of the book?

Enter our giveaway by clicking here or on the image below. 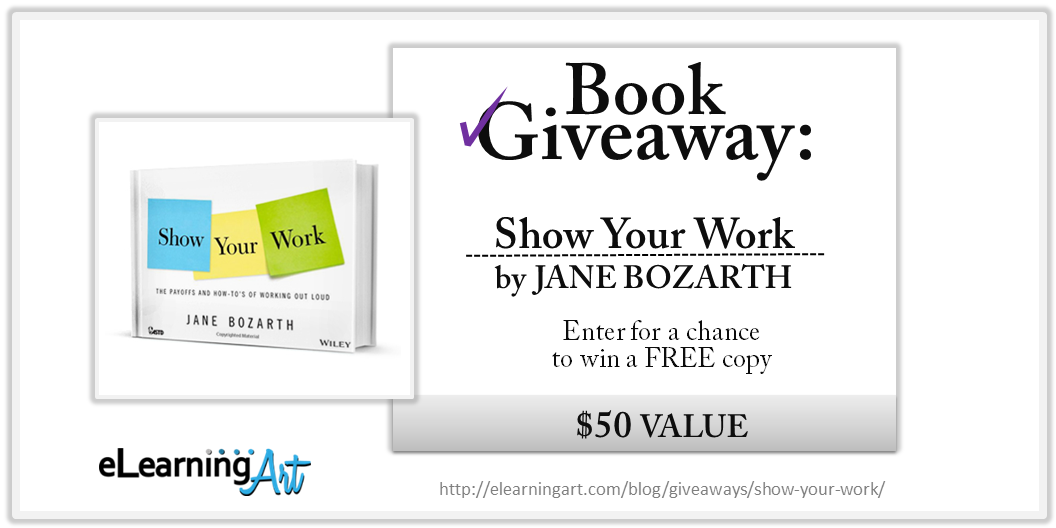